"Hi everyone, my name is Julia Tilley and I am a Gisborne-raised beach volleyball fanatic. My love of sports started at an early age and coupled with my competitive nature, saw me involved in a variety of sports. In 2007 I captained the Campion College senior A volleyball, netball and basketball teams, while also achieving academically and fulfilling my responsibilities as a school prefect. Later that year I was named Campion College Sportswoman of the Year and with my beach volleyball partner, won the Poverty Bay Sports Team of the Year award. That was the year my real passion for beach volleyball began, and a silver medal at the secondary school championships earned my partner and I a spot in the New Zealand team and cemented my commitment to the discipline. In 2008 I headed to Waikato University, with a Sir Edmund Hillary Scholarship under my belt, to complete a three-year Degree in Sport and Leisure majoring in Management Communications. This was followed by a post-graduate diploma in primary teaching. Over this time I remained devoted to beach volleyball, making elite NZ high performance squads and competing in the under 19 and under 21 world champs, as well as a host of other tournaments in such places as Korea, Thailand, Poland and Indonesia. It's now 2012 and my passion for beach volleyball is stronger than ever, coming off the back of a successful season with my partner and I being selected as the number one team to compete in China in the Olympic qualifier. This has made me more determined to become a professional beach volleyball player and compete at a top international level. I would love for you to be a part of my sporting journey towards the 2016 Olympic Games and beyond, in my quest to put New Zealand on the international beach volleyball map."

"Julia is a dedicated beach volleyball player who has a very bright future in the sport.  She has become one of the top beach volleyball athletes in NZ and has the potential and determination to achieve on the international scene."

Hey, our names are Julia Tilley and Shaunna Polley and we are a devoted and passionate beach volleyball team who have recently risen to the top of the New Zealand beach volleyball scene.  Last season Julia and her old partner become the top ranked New Zealand pair at various national events, going on to win a bronze medal in the Oceania Continental Cup before being selected as the top team to represent New Zealand in the Olympic Qualifier earlier this year in China. This year, playing with Shaunna, Julia hopes to compete further.

Competing at this level reinforced Julia’s desire and determination to become a professional beach volleyball athlete and compete at an international level, with the ultimate goal of making it to the Olympic Games and winning a medal at the 2018 Commonwealth Games. Shaunna has hopped on board sharing the same aspirations, passion and drive for Beach Volleyball.

The next step that we need to take to make this dream a reality is to focus solely on improving our volleyball skills through consistent training and regular competitions. Volleyball New Zealand has very limited funds and sadly money is essential for the transition from achieving nationally to achieving on the international stage.

If we are to have any chance, Julia’s teaching career has to take a back seat so she can concentrate on volleyball, beginning with the New Zealand pro tour this summer, leading up to the Asian tour early 2013. We have also been invited to attend an international beach volleyball camp in Adelaide in January/February, which is a huge opportunity for the girls to learn from some of the best players around the world.

So this is where you come in!  We need funding to get ourselves to these events (petrol and flights), cover the entry fees and to survive while touring. We would love to have you onboard for our journey to sporting success and we have a variety of goodies to offer those of you who are kind enough to help us with our dream.

We will also keep you, our supporters, updated on our progress so you can see just what your contribution has enabled us to accomplish. Your sponsorship is vital to our success in representing New Zealand and being a force on the international stage! 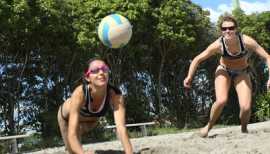 Join up and support Julia!