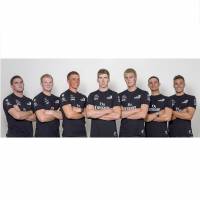 A group of New Zealand's top youth sailors have an opportunity to compete at the first ever Youth Americas Cup Regatta in September 2013 - and they need your support to help them win it for New Zealand.

Burling and his London 2012 Olympic silver medallist teammate Blair Tuke will lead the team of under 25’s including: Andy Maloney, Jono Spurdle, Guy Endean, Sam Meech and Jason Saunders. Together they will race under the burgee of the Royal New Zealand Yacht Squadron, a club with an enormous reputation on the international yachting scene.

Pledge to this project and help this talented group of youngsters carve a new pathway to sailing at the Americas cup. Everybody that pledges $150 or more will go in the draw to win one of two NZL Sailing SLAM jackets!

Total pledges can go over the targeted amount of $50,000, and if you can’t make a pledge or donation - please help us spread the word and reach other people who can contribute.

In return, only if the NZL Sailing Team with Emirates Team New Zealand meets its goal, they will decorate their boat with your name or logo and give other pledge specific rewards such as team t-shirts or autographed thank you cards.

Contact Us if you are interested in greater sponsorship and VIP opportunities.$1000 will get your company logo significantly positioned and exclusive memorabilia for your offices. +64 9 361 1471

This is the first time that young, talented sailors have had a clear pathway towards competing for one of the most prestigious trophies in sport. The Red Bull Youth Americas Cup opens the door for young sailors to gain the experience they need to contribute to a cup team.

Racing will take place in the same high performance, wing sailed AC45 catamarans that are used in the Americas Cup World Series.

“We’re tremendously appreciative for the help that ETNZ has provided our young team to date, including time on their AC45, coaching support and training advice” says YNZ’s Chief Executive David Abercrombie. “There’s a degree of public misconception about funding and the reality is that these young sailors cover their own costs for the Red Bull Youth America’s Cup. Any support the public can contribute will make a huge difference to these young men.’

The regatta itself will take place from 1-4 September 2013 in San Francisco during the break between the end of the Louis Vuitton cup, and start of the 2013 America’s Cup Finals. The young crews will race on the scaled down version of the America’s Cup Boats: the AC 45 catamaran. Every sailor in the Red Bull Youth America’s Cup will be aged 19-24. Ten teams from eight countries have qualified. 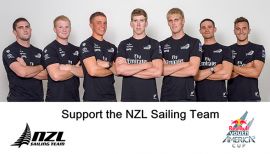 Join up and support Yachting!